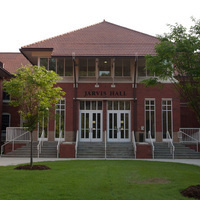 Jarvis Residence Hall
Phone: 252-328-4022
In 1909, Jarvis Hall opened in the Central Neighborhood, housing both the university’s students and originally classes. Jarvis Hall is named for Gov. Thomas Jarvis who is considered the father of East Carolina. The hall currently houses just over 130 residents and is the smallest residence hall in terms of beds.

This event content is powered by the Localist Community Event Platform.